Herman Smorenburg went to school in Amsterdam, North Holland but later ran away from home, according to folklore. He found work on a ship owned by the Dutch-East Indies Company who left for South Africa.3 Whether he actually joined his older brother, Jan Willem Smorenburg (1881 – 1968) is not known.4,5 Both later supported the cause of the Boers in the independent Zuid-Afrikaansche Republiek [ZAR] (South African Republic) in their fight for freedom against the imperialistic British Empire, with Jan and Herman joining the Boer forces in ca 1899.6,7

TAKE NOTE: Our Herman Hendrik Smorenburg should not be confused with the well-known Dutch painter Herman Smorenburg, who was born in 1959 at Alkmaar, North-Holland, Netherlands.8

Herman, then 29 years old, married the 25 year-old Janet Connell Thomson on 17 April 1913 at St George Presbyterian Church at Johannesburg, Transvaal in the Union of South Africa.9

Janet was born in February 1887 at Glasgow, Scotland.9 She was the daughter of Robert Thomson and Isabella Plenderleith who immigrated with their children from Scotland to South Africa.10

Janet Smorenburg (née Thomson) died one month before her 74th birthday on 30 January 1961 in Johannesburg General Hospital. At that time she was residing at 3 Corona, 80 Edith Conell Street, Hillbrow, Johannesburg.10

According to folklore, Herman Smorenburg worked on the 473 km long NZASM (Nederlandsche Zuid Afrikaansche Spoorweg Maatschappy) railway line between Pretoria and Delagoa Bay (now Maputo in Mozambique) and in particular at the 400 m long NZASM Tunnel through Elandsberg (Elands Mountain) between the two towns, Waterval-Boven on the Highveld plateau and Waterval-Onder in the Lowveld, within the ZAR, also known as Transvaal Republic (now Mpumalanga province in South Africa). After six years of construction, the line was opened in November 1894 by the ZAR President, Paul Kruger. This same railway line would later became his escape route before the advancing British Armed Forces when the tide started to turn against the Boers during the the Second Anglo-Boer War (also known as the South African War) of 1899 to 1901.3,12-16

The construction to the tunnel itself started in 1892, and this meant that Herman must have been between 10 and 11 years old, to have worked at the tunnel, if the family narrative is true. Was it possible for a youngster of 9 to 10 years old to find his way by himself from Europe to a South African harbour and then travel to the land-locked ZAR? Maybe he had some older company? (Herman’s brother, Jan was just two years older than him). Although not uncommon for European children to do hard labour and work long hours, was this also permitted in the ZAR during the building of the NZASM line? 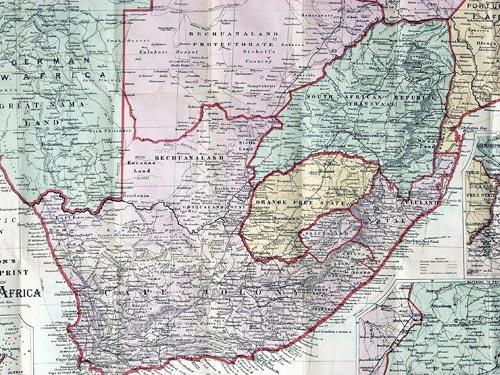 Herman Smorenburg was residing at Waterval-Boven, by the time the Second Anglo-Boer War (ABW2) broke out in October 1899. The young Herman, in his late teens (approximately 16 years old), enlisted in the Boer Army as a volunteer.6 It is likely, yet not certain, that Herman joined the same commando as his brother, Jan and his cousin, Andries Smorenburg (1872 – 1939). Andries was the Commandant-in-chief of the Second Dutch Foreigners Section of the Corps van Nederlanders en Oud-Nederlanders. Jan Smorenburg was Quartermaster of the same commando.17,18 By February 1900, the Corps with its various sections were merged with other foreigner commandos to form the International Legion under headship of French nobleman Colonel George de Villebois-Mureuil. The Legion, also referred to as the European Legion or Foreign Legion, did not have the usual army structure but rather consisted of a loose collection of some Boers and Dutch, French, German, American and Russian volunteers organised in detachments under the leadership of commandants.19,20

Andries and Jan were captured during the Battle of Boshof, a small farming village in the independent Boer Republic of Orange Free State (OFS). On 5 April 1900 the Boer Forces, consisting of a independent Boer commando and a detachment of about 125 men of the International Legion under leadership of De Villebois-Mureuil, were unexpectedly attacked by British forces under command of Lord Methuen. The Boer commando fled when the tide started to turn against them but most of the Legionnaires remained and were eventually 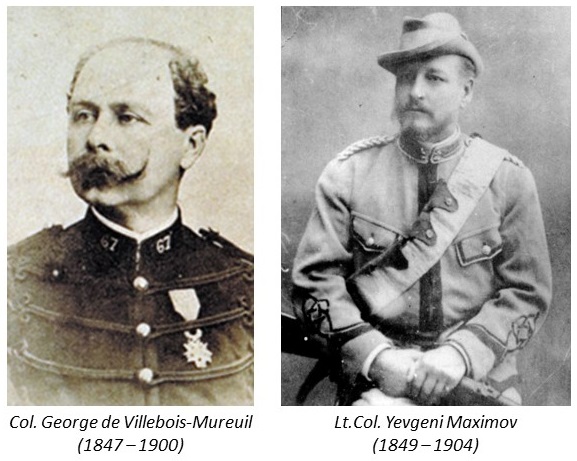 beaten. Andries and Jan Smorenburg with 62 others were captured and sent off to St Helena, a remote island in the Atlantic Ocean, as prisoners-of-war (POWs). De Villebois-Mureuil was killed during this battle. At that time, the rest of the Legion under command of De Villebois-Mureuil’s deputy, the Russian Lieutenant-Colonel Yevgeni Maximov, was grouped near Brandford awaiting further instructions, while undergoing further training in field combat and military discipline. The young Herman Hendrik Smorenburg must have been part of this grouping. When the news broke of De Villebois-Mureuil’s death and fate of his detachment, Maximov was appointed the new leader of the remainder of the Legion, but the Legion soon thereafter broke up in its constituent detachments. One of these was the Hollander Corps who remained under the command of Maximov, and Herman Smorenburg had the honour of serving under this formidable Russian commander (One wonders if Herman at this point knew that his brother and cousin were still alive).19-24 Maximov and his Corps had a high reputation and were respected by the Boers. Moreover, Maximov led several raids to rescue Boer families from the farms seized by the British. On 30 April 1900, however, the Hollander Corps of 150 men encountered the British Army at Houtbrug Pass at Tabokop (Tabo Mountain) near Thaba N’chu, approximately 60 km east of Bloemfontein. Only two men were killed and five seriously wounded. Unfortunately, one of the wounded was Maximov himself. The next day, on 1 May 1900, the Corps suffered heavy casualties, including its new commander. Herman Smorenburg was taken prisoner that day.  READ MORE on the battles near Thaba N’chu. The POWs were sent off to Ceylon (now Sri Lanka) for the remainder of the war. Herman Smorenburg, then 17 years old, with POW number 3362, spent the first couple of months in Diyatalawa Camp on Ceylon, then was transferred to Ragama Camp until the end of the war in 1902.6,19,20,25-27

Diyatalawa Camp was the main camp at Ceylon. It was ringed with a deep trench and barbed wire entanglements. The POWs referred to the camp as Boer Town and had two laagers (settlements) dubbed by the prisoners as Kruger’s Dorp and Steyn’s Ville. The Transvaalers occupied the first, named after the President of the ZAR, Paul Kruger (1825 – 1904), while the second was occupied by Burghers from the British occupied Orange River Colony (previously Orange Free State) and named after President Marthinus Steyn (1857 – 1916).28  During his time at Diyatalawa Camp, Herman Smorenburg compiled three unique journals that revealed his extraordinary artistic skill. One journal was for his friend at the camp, the other was intended for Queen Wilhelmina to be sent after the war and the third he kept for himself. (The latter was auctioned off in 2012 by his alleged ‘grandson’).7 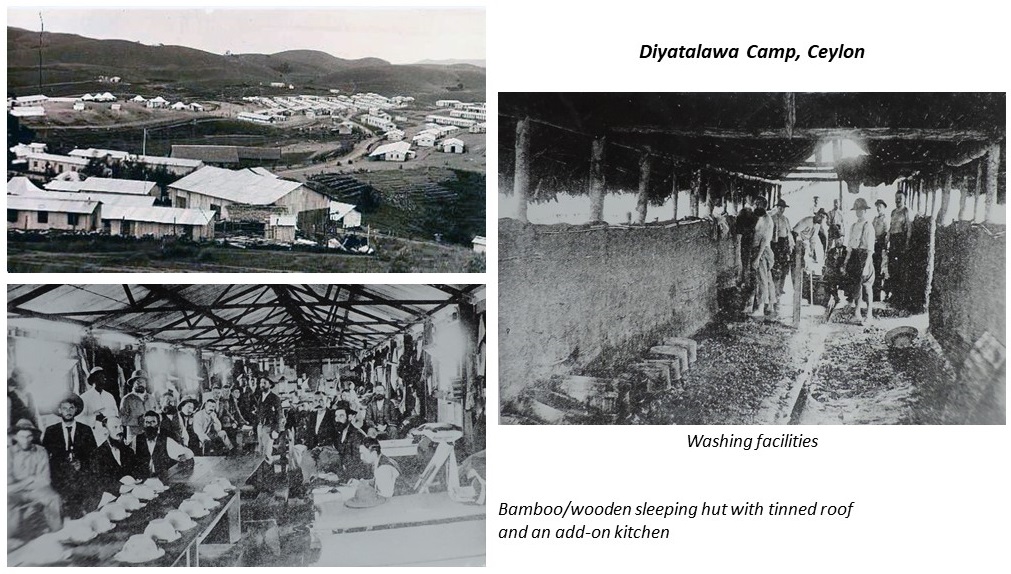 Herman was later transferred to Ragama Camp. Dissidents and irreconcilables who would not sign the oath of allegiance to the British Crown were housed at Ragama Camp. The first inmates were welcomed on 8 January 1901.7,27 After the Peace Treaty of Vereeniging was finally signed on 31 May 1902 at Melrose House in Pretoria,29 the “burghers of the late South African Republic and the late Orange Free State were permitted to proceed to South Africa immediately at their own expense, or to await repatriation as soon as arrangements could be made for their transportation. Foreign prisoners-of-war, except those able to produce evidence that they were nationalised Burghers, were not allowed to return to South Africa. They were permitted instead to leave at once at their own expense if they wished to do so, or await repatriation by the Consuls of their respective Governments. All releases were subject to a declaration of allegiance to the British Crown.”28 Herman was released on (possibly) 28 July 1902 and repatriated to the Netherlands on the Dutch steamer SS Alak. Two POW medallions were issued to Smorenburg – a Ragama Camp Ceylon “Scum of the scum” medal (dated 1901) and a Rotterdam Lloyd medal (dated 28 July 1902).7,30 But Herman soon thereafter returned to  the British Transvaal Colony (previously ZAR).3 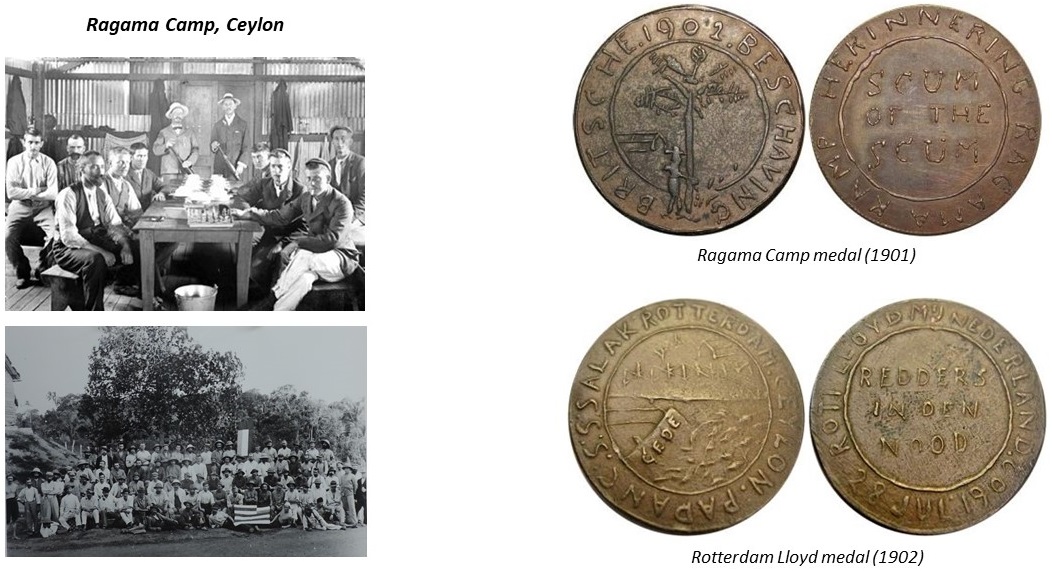 Before the age of 20 years, Herman Hendrik Smorenburg worked hard as a railway track labourer, fought in a guerilla war and spent time in an offshore POWs camp. He certainly had to mature very quickly from a youngster into a man, by developing the skills and tenacity to persevere and overcome many hardships and challenges early in his life.

The older Herman and his family resided in eastern Johannesburg where he worked as a horse riding school instructor for many years. The school was called Daughters of the Transvaal and provided horse riding lessons to mainly women, which was in particularly high demand after the ABW2.3,11 Later in his life as he aged and until his death, he worked as a laundry traveler (laundry-van driver). He collected dirty laundry from homes and hotels and after being washed, dried and ironed at the laundromat, delivered the clean laundry again at the appropriate addresses.3,31

Herman also was a volunteer in the Transvaal Horse Artillery.10 When and for how long is not known. The regiment, based in Johannesburg, was formed on 17 March 1904 and still exists today as part of the South African Army Artillery Formation. In World War I (1914 –1918), this reserve unit participated in the German South-West Africa Campaign and was also part of the South African Heavy Artillery in Palestine, Egypt and Europe. Volunteers also served in World War II (1939 – 1945) and the South African Border War (also known as Angolan Bush War) (1966 – 1990).32

The last few years before his death he suffered from Parkinson’s disease.3 Herman Hendrik Smorenburg, nicknamed “Pop”, died at the age of 63 years and 3 months on 31 October 1946 at the Provincial Home, Modderfontein, Johannesburg. At the time of his death, the couple lived at 116 De Korte Street, Clifton, Johannesburg. Apart from movable property, Janet inherited an Insurance Policy with African Life Ass Co Ltd worth 100 pounds.3,31 Janet Smorenburg died on 30 January 1961at the age of 73 years and 11 months at Johannesburg General Hospital. At the time of her death, she resided at 3 Corona, 80 Edith Conell Street, Hillbrow, Johannesburg.10

Sixty-six years after Herman Smorenburg’s death in 2012, several of his effects were auctioned by Fine Art Auction House and Antique Auctioneer, Stephan Welz & Co., Johannesburg. These included various Anglo-Boer War memorabilia such as his personal Ceylon POW camp album, his Dutch-English Dictionary and his two POWs medallions. Furthermore, a pair of gold-and-silver cuff-links that belonged to Herman, was also auctioned off.7,33 Sadly, these sentimentally-precious artifacts are now lost to Herman’s descendants.

Herman and Janet Smorenburg had only one child, a daughter.

Isabella was born on 11 May 1914 at Johannesburg, Transvaal. She married William Gustave “Willie” Rowlinson in 1936.34,35 They became my husband’s grandparents. READ MORE on Isabella Smorenburg and her husband Willie Rowlinson.