Andries Smorenburg came with his employer from the Netherlands to South Africa in ca 1887 in search for greater fortune. His cousins, the two brothers Jan Willem Smorenburg (1881 – 1968) and Herman Hendrik Smorenburg (1883 – 1946) later followed him to the southern tip of Africa to assist the Boers in their freedom fight against the British Empire during the Second Anglo Boer war, also known as the South African War (1899 – 1902). By then, Andries was already Commandant of the Second Dutch Foreigner Unit. Both Andries and Jan were later captured during the Battle of Boshof on 5 April 1900 and were sent off together with 62 others of the International Legion to the remote island of St Helena in the Atlantic Ocean, to remain at Deadwood Camp until the end of the war. Herman Smorenburg was captured on 1 May 1900 near Thaba N’chu, and together with other foreigners from the Hollander Corps were sent to Ceylon as prisoners-of-war (POWs).1-9 Herman later returned to South Africa and became my husband’s great-grandfather. 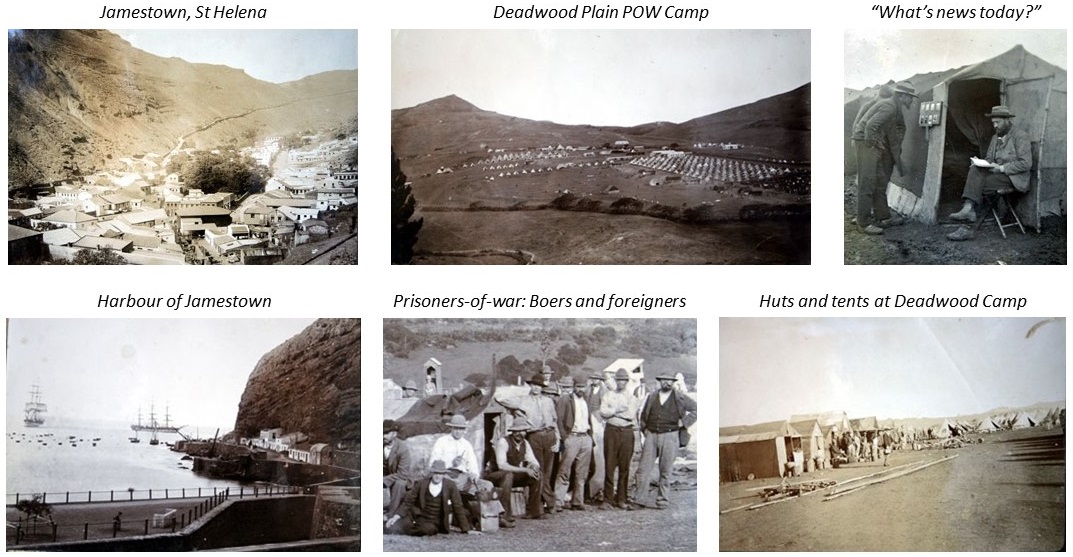 Andries Smorenburg’s restless spirit obviously did not agree with the British confinement imposed upon him, and in late 1901 he attempted a daring, albeit unsuccessful escape from the island in the middle of nowhere. His plan? Mailing himself to freedom!

By the time Andries conceived his extraordinary plan, he was on parole. This allowed him free movement in the camp, in and around Jamestown and on the rest of the island. This meant that he had easier access to the necessary materials and stock he required for his trip. At Deadwood Camp, Andries built a a wooden packing crate (1.30 x 0.71 x 0.69 m) to contain his 1.83 m tall body in a crouched position. Three of the sides could be opened or closed from the inside. These panels were concealed with iron straps. This couldn’t have been too difficult for Andries to build since he was a carpenter by trade. Clothing, matches and a few candles, food (biscuits, tins of bully beef, jam, and meat spread) and water for about 20 days, as well as a rough map of the Southampton Docks, were collected over time and packed inside the crate. “Tobacco would be my greatest difficulty, as l was an inveterate smoker”, he complained in his memoirs, “but I learned to do without cigarettes before I made my attempt to escape.” The crate was labeled with the name of the sender, De Wet Hamer (a false name), and addressed to Chaplain Martin, 4th Gloster Regiment, Stroud, Gloucestershire, England (a false address).2,3,10

The completed crate was transported with the ambulance chart, with the help of friends and his cousin Jan Smorenburg, to Jamestown where the ship’s agent received it as luggage. It was scheduled to depart with the next mail shipment on the Union Castle Mail Ship SS Goth on 22 December 1901. In the early hours of the misty morning of 20 December, Andries sneaked, with twenty five pounds in his pocket, past the guards at Deadwood Camp by crawling through a shallow ditch underneath the camp enclosure and finally reached Jamestown. At the harbour, he couldn’t find his crate, decided to swim out to a loaded barge about 100m away, to discover a sleeping guard ….. and his crate! A few hours later, the crate, with its uncomfortable content, was loaded on board the SS Goth. In spite of the labels on the crate – ‘Boer Curios’, ‘Handle with Care’ and ‘This Side Up’ –  it was handled rather roughly while being loaded. After the ship’s departure, Andries tried to free himself from his confining crate, but was unable to open the panels since mail bags and other crates and luggage were piled up all over. While still at sea, the luggage, including Andries’ crate, was tossed about and eventually

overturned. Andries suffered concussion and lost most of his water, but he was able to emerge from his crate and make himself a bit more comfortable in the dark, hot and stuffy hull of the ship.2,3,10

But all good things come to an end, as they say. Five days and 1300 km later, on 25 December 1901 on Christmas Day, Andries was discovered. When the ship arrived in the morning at Ascension Island, the trapdoor to the hull was opened by a sailor to collect luggage and mail bags. As the sailor descended down the ladder, Andries had just enough time to disappear back into his crate. According to Captain John Attwood, however, the unnerved sailor reported the presence of a ‘ghost’ and this resulted in a thorough search through all the luggage by Captain Eaton Travers. When they reached Andries’s crate, Andries anxiously called out: “Stop! I’ll come out!” and made his appearance. Andries was handed over to the authorities and after a thorough interrogation was sent back to St Helena on board the SS Gibraltar on 30 January 1902. Upon arrival on 4 February 1902, he was locked up in the military jail at Deadwood until 13 February 1902 when he appeared in front of the Court Martial. He was found guilty of abusing his parole conditions and for trying to escape, and was sentenced to imprisonment until the end of the war. This was executed at Fort High Knoll Prison at St Helena, with Andries being allowed only a few hours of movement and exercise per day. He was also allowed to write or receive letters. Once the war was over, and Andries was willing to sign allegiance to the British Crown, he was allowed to return to South Africa.2,3,10,11

There are two other version doing the rounds on how Andries Smorenburg was discovered, and requires more in-depth research:
1) The absence of Andries Smorenburg was noted at the next POW roll-call at Deadwood Camp. An urgent message was telegraphed to Ascension island, to be on the look-out for a possible escapee. The luggage on the SS Goth was searched once the ship arrived at Ascension, and Andries was discovered.
2) Andries was betrayed by a Dutchman, a Captain H., who upon doing so, was pardoned, released and allowed to return to the Netherlands. Apparently Andries tracked him down many years later, only to discover that he was a dying man. Andries was able to let go and forgive.2,3

The crate of Andries Smorenburg is currently on display at the MuseumAfrica in Johannesburg.