How much schooling Richard received, is uncertain. In his late teens, he was already working as a yard labourer.6 When he was in his twenties, Richard left Britain in search for a better life and migrated to the southern tip of the African continent which had been dominated by Britain since 1806. During the reign of Queen Victoria from 1837 to 1901, the colonisation of Africa expanded further north.7-9

Dick married his wife, Rose Mary Sepp (née Stitson) in Johannesburg, Transvaal in 1914.1,10,11 Rose Mary was the sixth child of Samuel Stitson (1848 – ?) and Elizabeth Ann Wood (1859 – 1948), who were from the poorer labouring class in Britain. Rose Mary was born on 14 April 1888 at Keighley, Yorkshire, England. She had one half-brother, Henry, from her father’s first marriage, and nine brothers and sisters from his second marriage: Ernest Walter, Henry William, Havelock, Violet May, Lily, Samuel, Hannah Eliza, Alfred and William.1,12-15 READ MORE on the Stitsons.

At the time of her marriage to Dick Rowlinson, she was a widow with a young son, William Gustave Sepp (1911 – 1998), from her first marriage to Witwatersrand gold miner, Charles Frederick Sepp, who had died in 1912. Rose Mary came from England to South Africa with her first husband in ca 1910 during the ‘gold rush’ in British Transvaal.16,17

Rose had four more children with her second husband. She was a housewife and took care of her children. Rose died of gall bladder cancer at the age of 78 years and 3 months on 10 July 1966 at Boksburg-Benoni Hospital, Boksburg, Transvaal, South Africa. The cancer was diagnosed six months prior to her death.11

Dick Rowlinson arrived in South Africa sometime between 1901 and 19117,18 during the height of the ‘gold rush’ on the Witwatersrand which started with the discovery of extensive gold deposits on the Rand in 1886. As a result of the influx of fortune-seeking foreigners and natives, as well as hopeful residents of the two British colonies and two independent Boer republics, Johannesburg rapidly developed from a temporary tented mining camp into a thriving town, and eventually received city status in 1928, becoming the largest city in Africa.8,21,22 Dick also lived in Johannesburg where he worked as a miner at the deep-level gold mines. Working as a miner underground was a dangerous task under difficult working conditions, with exposure to dust, gases, heat, clamminess, poor air ventilation and inadequate safety provisions. Miners worked long hours, often for wages that could be considered exploitative. Mine bosses tried to keep wages as low as possible, to ensure the highest possible profits.22,23 That the Rowlinson family had difficulty to make ends meet on the mines and later on, was evident from the fact that the boys left school and sought work as they reached puberty. Willie, the eldest, left school at the age of 14 years (Standard 6 level) to find work at a shoe shop in order to help providing financially for his childhood family.18 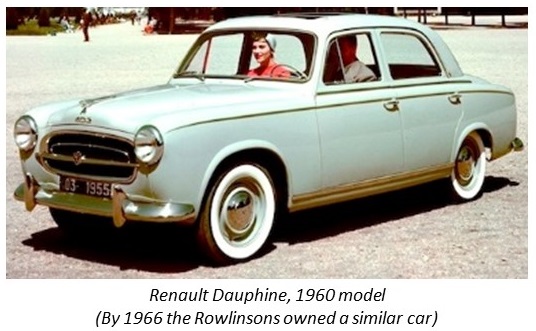 Later on, Dick found work as a butcher, worked himself up and finally succeeded to own his own butchery in Johannesburg. This career he pursued until his retirement.18,19 Moving away from the mines, the Rowlinson family was able to carve out a better life for themselves. As a result, however, of the Great Depression of 1929 to 1934 when meat became a luxury food commodity for most people, Dick’s butchery business went bankrupt and he was unable to pay his debts. Yet, his wife vowed that they would pay back every cent they owed. She started to sow and make clothes for others, and also baked cakes, including wedding cakes, to keep their family financially afloat. And slowly, the family recovered.8,18 By the time Rose Mary died, the couple owned a 1960 Renault Dauphine (registration plate number TB 6583) and property shares to the value approximately R 16 000. They lived comfortably in a South African middle-class society at Boksburg, a town in the Witwatersrand area in the Transvaal (now Gauteng).11 Their oldest son Willie, later followed in his father’s footsteps and eventually became the proud owner of his own butchery in Krugersdorp, Transvaal.18

Richard Hewitt Rowlinson died of pneumonia with associated cardiac failure at the age of 81 years and 7 months on 17 August 1967 at Sterkfontein Hospital, Krugersdorp. At that time, he resided at Boksburg, and was probably visiting his one son who stayed in Krugersdorp when he fell ill. From his estate, each one of his five children and each grandchild received cash to the value of R 2 605 and R 200, respectively. The bulk of this pay-out came from the shares Dick owned at the Johannesburg Building Society.19 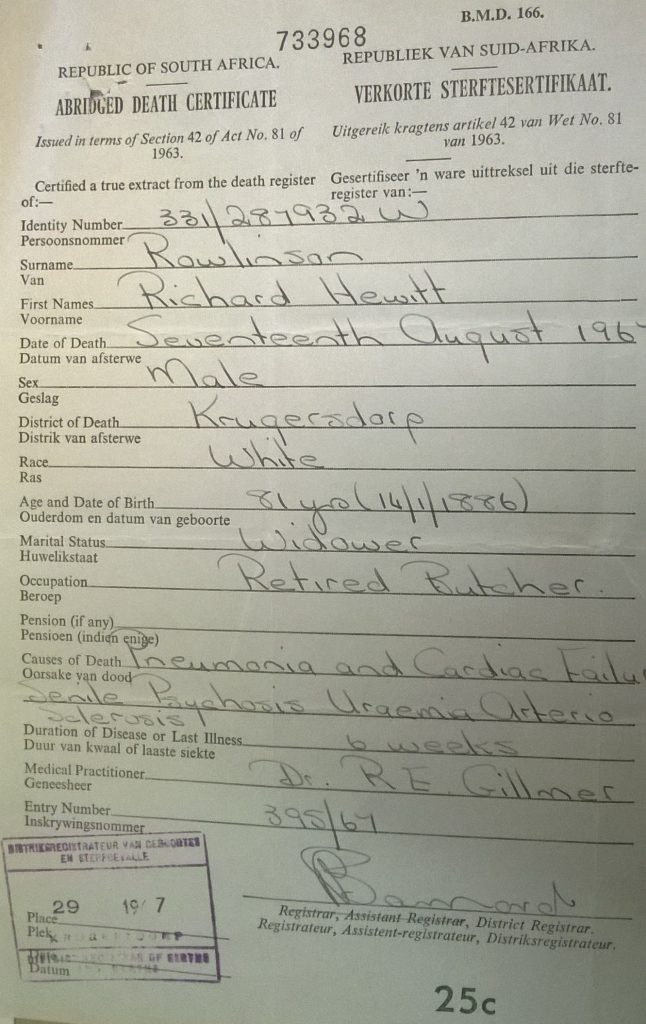 Leaving Britain as a young man belonging to the poorer laboubering class, in search for better prospects at the southern tip of Africa, seemed to have paid-off for Dick Rowlinson. The initial start-out on the mines, which offered abundant low-paid job opportunities in Johannesburg, were under challenging circumstances. Later in the early 1930s, the loss of income and dignity that came with the Great Depression, was another blow, yet Dick persevered and was able to retire contentedly. I hope he felt proud of what he had made of his life.